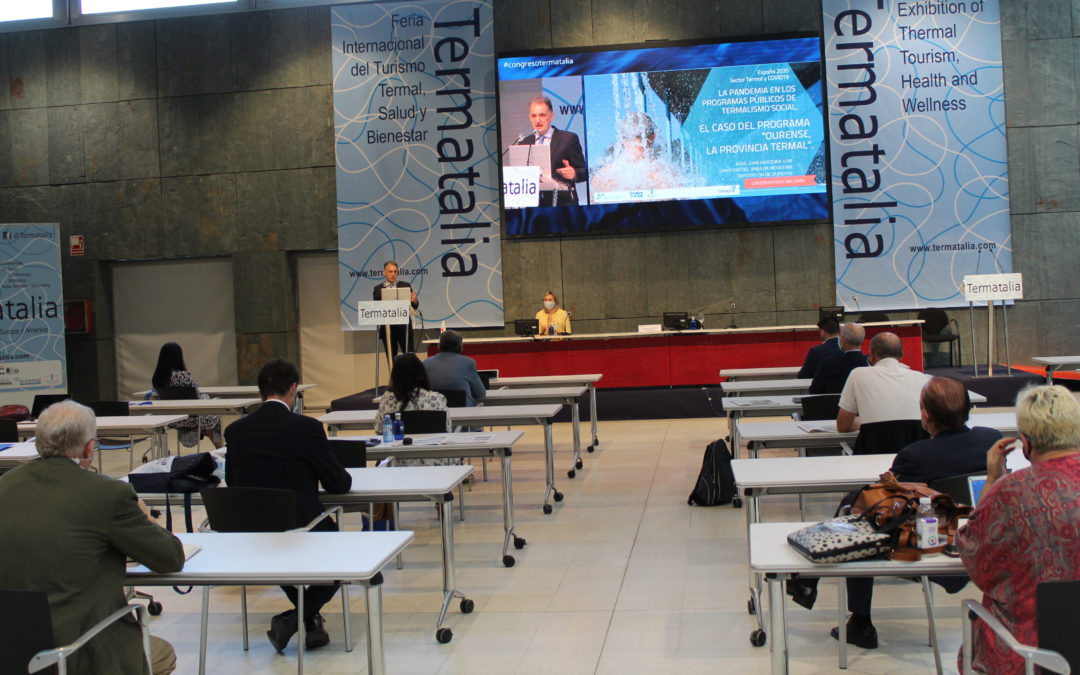 >> Safety, sustainability and innovation become the main tools of thermal destinations to survive the crisis caused by the COVID-19 pandemic

Ourense, 09/17/2020.- Termatalia concludes with successful attendance the 1st International Congress on Water and Health, organized to fill the gap left by the cancellation of the fair and as an opportunity to continue gathering the international thermal community around this event which has already become a world brand in spas. They have been two days of intense activity during which 50 speakers from 10 countries analyzed the current situation of international health tourism marked by the pandemic and which were followed, between online and in person from Expourense, by more than 500 registered attendees from 30 countries from 4 continents.

Prevention and rehabilitation. COVID-19 inevitably became the common thread of this congress in which the vast majority of the speakers highlighted that this pandemic is a good opportunity to give balneology and hot springs the recognition they deserve for their influence in strengthening the immune system and also because it can facilitate the rehabilitation of those who have already contracted the virus.

Related to this, the Tourism, Innovation and Sustainability Conference was held today, in which thermal destinations such as Galicia, Extremadura, Costa Cálida, Murcia or Portugal, among others, were presented. The speakers agreed on the opportunity that this situation represents to “reinforce the image of a safe and sustainable destination since we offer a type of tourism that respects the environment that also improves the quality of life of the people who live in the thermal environment”, as explained by the director of the Galician Tourism Agency, Nava Castro, during her speech this morning. In the current context of health crisis, health tourism will be strengthened since tourists will increasingly worry more about seeking destinations that, at the same time as a period of rest and enjoyment, can help them to contribute to leading a healthy lifestyle and preventive. These attributes are found in the Thermal Province of Ourense that also presented its public program of social hydrotherapy.

This conference on innovation also hosted the exclusive presentation of the video of the project “A rest on the roads” that has the objective of selling Galicia as a healthy destination and that has the collaboration of the Galician Tourism Cluster, and the partners of Expourense, Balnearios de Galicia, Grupo Caldaria, the Union of Ourensan Hoteliers and Amigos da Cociña Galega. They also spoke about innovation from Termas de Portugal, which has just created the exclusive “Clean & Safe” seal for thermal centers and which aims to reinforce tourist confidence; and from the Eurocidade Chaves-Verín that has created campaigns that include, starting from hydrotherapy, all the tourist resources of the cross-border region, such as the WWW project (Water, Wine and Way) making reference to hydrotherapy, enogastronomy and Santiago road.

This second day a table was also held on the different safety and prevention protocols in spas and thermal centers coordinated by the director of the Chair of Medical Hydrology at the University of Santiago de Compostela, Dr. Juan Gestal, who has already become the reference doctor in Galicia when talking about coronavirus. In this panel, the Spanish Tourism Quality Institute (ICTE) presented its guidelines for reducing the spread of COVID-19 in spas. Its director, Fernando Fraile, made it clear that there is no “COVID-Free” (COVID-free) and that the user cannot be deceived with that term. On the other hand, the medical director of the Caldaria Group Spas, Dolores Fernández, who explained the measures taken by their centers to avoid contagion.

Argentina was one of the leading countries in this edition in which it was recalled with a certain nostalgia that these days the fair should have been held in the Argentine province of Entre Ríos, but in which optimism was also possible as the participating Argentine authorities ratified their interest in celebrating the next edition of Termatalia in Latin America in the province of Entre Ríos. In fact, this country has starred in the closing panel of the congress in which representatives of prominent thermal provinces such as Entre Ríos, Santiago del Estero, Catamarca, Chaco, Jujuy, La Rioja, Misiones, Neuquén and Salta participated. It was moderated by the executive secretary of INPROTUR, Ricardo Sosa, one of the great international supporters of Termatalia. Ricardo Sosa recalled the celebration of Termatalia Argentina 2014 in Termas de Río Hondo, province of Santiago del Estero, being the undersecretary of Tourism of that province and commented “that Termatalia was a turning point in the international positioning of Argentine hydrotherapy in general and of Rio Hondo hot springs in particular ”. He also made reference to the fact that this Congress was the first blended event in which the Government of Argentina participates in 6 months.

This Congress had the support of the Provincial Council of Ourense and the Department of Tourism and Thermalism of the City of Ourense, entities that have been joined by other collaborators such as the Chair of Medical Hydrology of the University of Santiago de Compostela, Tourism of Extremadura, Costa Cálida-Region of Murcia, the National Institute for Tourism Promotion of the Argentine Republic (INPROTUR) or the project “Un descanso en los Caminos”. 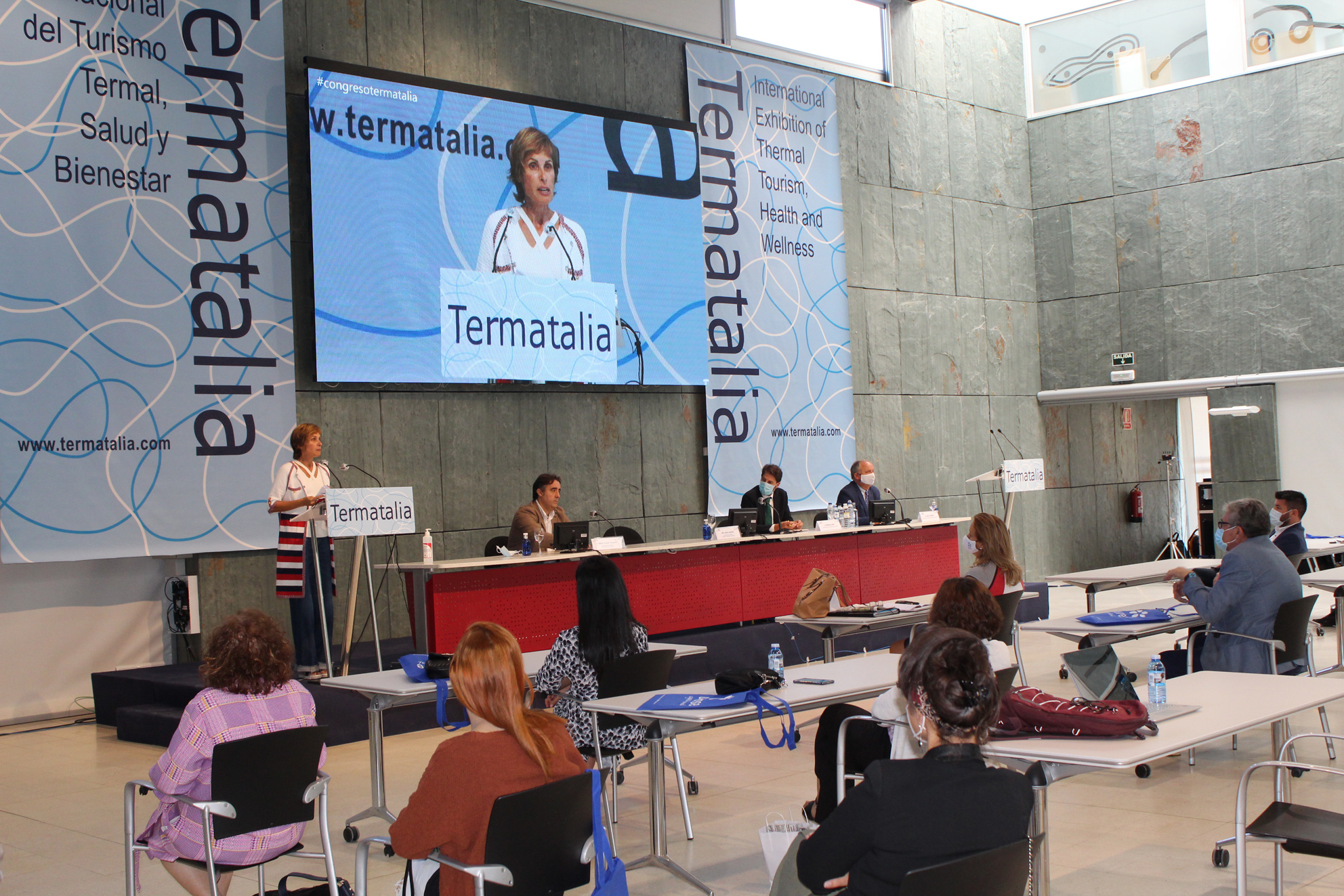 Be sure to participate in the 1st International Water and Health Congress. Request your participation through the following button.

Responsible : Fundación Feiras e Exposicións de Ourense
Purpose: Manage requests for stands and spaces for exhibitors at the fair
Legitimation: The consent given.
Recipients: The data will not be transferred.
Rights: You can exercise the rights of access, rectification, deletion and portability of your data, and the limitation or opposition to your treatment, to revoke the consent given and to file a claim with the Spanish Data Protection Agency.
Additional information: All the information provided can be found enlarged in the additional information that is available to you here